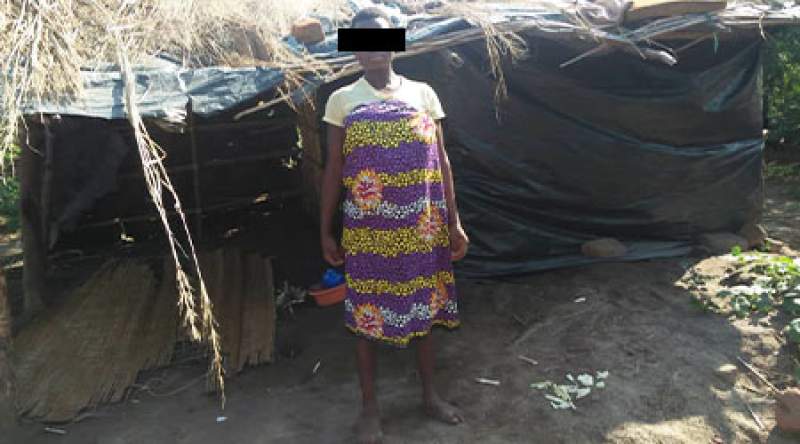 Covid 19 pandemic has slowed down. Life is gradually getting back after a long time of despair. As we were busy enduring the pandemic, back to back cyclones or tropical storms hit hard. The damage was massive and catastrophic.

Now the storms are gone, but the aftermath is deplorable. Tropical storm Ana, Dumako and Gombe caused severe suffering to the majority of already poverty-stricken households mainly in the southern part of Malawi.

The storms that started in January up to March this year killed about 50 people including children, injured 206, displaced 221,127 others with hundreds of houses razed down, crops and livestock washed away. Roads were also cut off. Most of those displaced including women and girls were placed in temporary camps.

Now, most families are getting back to their original homes with some four villages including Kanseche in Lundu area in Chikwawa and others in Nsanje to be relocated upland for they cannot continue to stay in flood prone areas.

Commissioner for the Department of Disaster management affairs (DoDMA) Charles Kalemba says they will soon start decommissioning the camps so that people can start rebuilding in their original homes.

He however says other district councils like Chikwawa and Nsanje have already found land for permanent relocation of flood survivors.

“I therefore ask district councils to stop keeping the food in warehouses. Let all food and non-food items go to support the flood survivors to reduce the challenges that they are facing. We also want children to start attending school,” explained commissioner Kalemba.

As DoDMA is doing its part, affected families are now reconstructing while struggling to access basic necessities, especially food. With all household items and crops and livestock swept away by floods, poverty is stinging extremely hard. But now, where is the girl child?

A snap check by Zodiak in three flood hit districts namely Chikwawa, Nsanje, and Machinga indicate that the pandemic and cyclones have significantly contributed to unplanned pregnancies and early marriages.

Some of the girls we have talked to are bitter and hopeless. They are in dire need of support.

We met a 15-year-old girl from Ngabu area in Chikwawa. She is seven months pregnant. The pregnancy has caused her to drop out of school. The teenage girl was in standard seven. The girl tells us that she was in a sexual relationship with a certain boy in the village.

“The boy has accepted to be responsible for the pregnancy but I would wish to get back to school once I deliver. I ask well-wishers to support me since my parents are poor,” she explains.

The girl is back at Matsukambiya, a severely flood hit area in Ngabu after staying in a camp for some two months near Sekeni village at Nchalo. Her parents, poor farmers, are now reconstructing after Cyclone Ana razed down their house. The family is currently living in a temporary shelter.

“The Camp life was very hard. We had no adequate food, no clothes and other basic needs for use since our belongings were washed away,” she narrates.

Away from Chikwawa, we go to Nsanje. Here, we meet two teen girls at Nthole flood survivors camp in Malemia area. One is aged 16 while the other is 17.

The 17-year-old girl, Mercy John, not her real name, tells us that she is pregnant. She narrates her story that a certain boy persuaded her to be a in sexual relationship and she accepted.

She adds that she accepted because her parents were finding it hard to make ends meet.  As the relationship was progressing, she later realized that she was pregnant.

She says they later got married. But as they were staying at the boy’ home, they picked a quarrel and she was chased away.

“I am regretting what happened, for I am suffering with the pregnancy alone. If I get support, I am willing to get back to school once I deliver. We came here at the camp in January and that time the government was supporting us with basic needs but it stopped,” narrates Mercy who dropped out when she was in form two.

Another 16-year-old girl, Lones Pitason, not real name, shares a similar story. She says was impregnated after sitting for her Junior certificate of education examinations.

Lones told us that life in camp is very hard due to limited daily resources after parents lost everything due to the devastating floods.

“Life is now becoming unbearable. I am also willing to go back to school once I give birth.”

From Nsanje, we move to Machinga district. This is a district where authorities are struggling to end child marriages.

For instance, in the area of Traditional Authority Sitola in Machinga, we meet a 15-year-old girl, Marriam, not real at her village. She says she went into a sexual relationship when she was in primary school, precisely standard six. The girl later got pregnant. She is now in full time marriage, staying with her husband and her one-year old child.

“We childishly started sexual activities and my boyfriend impregnated me. After staying at my home for some time, an arrangement was made for me to join my husband. We are now staying together with our baby,” she says.

She laments that the cyclones swept away their household items and a small business they were doing to earn a living as a new couple.

“We are facing hunger. I cannot go back to school but rather be assisted with a starter pack to start a small-scale business. This can help us to survive in our family,” explains the teen mother.

Minister of Gender, Community Development and Welfare Patricia Kaliati admits that teen pregnancies and child marriages have been long time challenges in the country.

She agrees that the Covid 19 pandemic and cyclones that caused havoc in most parts of the southern region fueled the situation.

“The assessment we conducted recorded 44, 000 child marriages and 13, 000 teen pregnancies. This made us roll out an awareness campaign targeting chiefs and other community leaders to protect the girl child,” says Kaliati.

Minister Kaliati adds that the government is also enforcing laws by arresting culprits that abuse girls, implementing the social protection programs and encouraging girls that dropped out to get back to school.

On the other hand, the Gender minister also acknowledges the role of different non-governmental organizations that are carrying out various activities targeting the girl child.

“We are aware that several organizations are providing bursaries to girls to remain in school. This is commendable and needs to be encouraged to ensure that more girls complete their studies and be productive citizens in future,” explains the minister.

As we speak, Young Christian Women Association of Malawi (YCWAM) and Regional Psychosocial Support initiative (REPSSI) are reaching out to over 300 young mothers in Blantyre and Machinga districts.

REPSSI Country Representative George Alufandika says teenage mothers have been imparted with different skills and encouraged to get back to school with others choosing to conduct small scale businesses as their children are given an opportunity of attending early childhood lessons.

“Young mothers face a lot of challenges. Some people mock them and that they lack resources to take care of their children,” says Alufandika.

He believes that consistent provision of psycho-social support to the majority of rural adolescent mothers can encourage them to have a deeper analysis of how to improve their lives.

“This is the reason we empower them with various skills including providing them with psycho-social support,” explains Alufandika.

One her part, Alice Bwanausi from YCWAM explained that apart from providing psychosocial support, young mothers were provided with training on leadership, positive parenting, income generating activities and village savings and loans.

“We also gave them loans to run small scale businesses. Some are buying and selling honey and most of them are doing well,” states Bwanausi.

“We are very concerned with the increase of child marriages in the district. Girls are being married as young as 12 years. We attribute a surge in these child marriages to cultural beliefs like initiation ceremonies,” complains Nthanthiwa.

But a child activist, Memory Chisenga is of the view that the government needs to uproot main causes of teen pregnancies and early marriages.

She believes more time and resources need to be invested in mindset change to improve the thinking of some communities that still believe that there is no problem seeing a girl child dropping out of school and getting married.

“Somewhere, we are missing a point as a country. Our reactive approach to emerging issues is making it difficult for us to make progress. We need long lasting solutions to end early pregnancies and marriages.

“I have a strong feeling that as a country we have to get to serious business when it comes to child protection,” explains she.

Chisenga emphasizes that sustainable measures need to be established to support and keep the girl child in school.