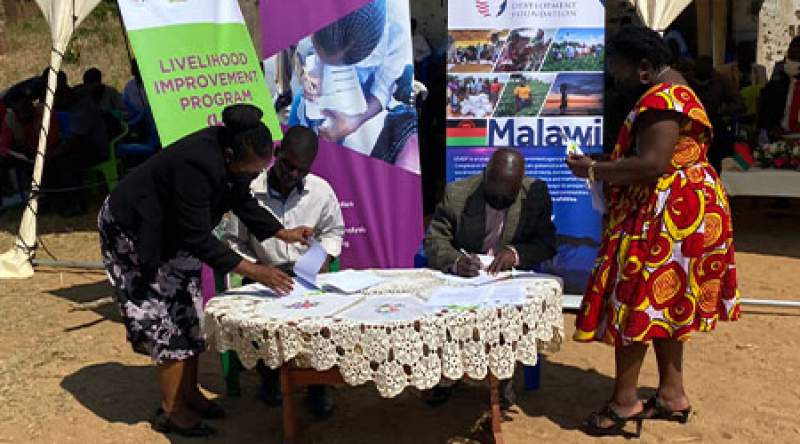 Country Program Coordinator for the organization, Lynda Ndovie Jere described cooperatives as vital in the provision of nutritious foods to communities and palliative patients; hence, a need to provide resources to them.

She said, for example, Mlindi coperative of Neno, has the ability to grow resilient crops such as groundnuts, pigeon peas, chilli and vegetables that do well even in times of drought.

"It is our core duty to make sure that cooperatives are empowered so that they are able to contribute to food security and let alone give farmers reward for their sweat by having equipment that will process their harvests for value addition," said Jere.

The country coordinator also challenges cooperatives to be innovative so that they compete well on the market.

She cited use of modern technologies as a key in this.

Mlindi cooperative chairperson, James Mazingaliwa thanked Helmsley Charitable Trust which is the main funder of the project saying the grant will help his cooperative to purchase equipment for pigeon peas processing.

"Our cooperative grows pigeon peas and we find this grant as an answer to our dreams of establishing a Nandolo factory so that we can we able to process it for export," said Mazingaliwa.

He further said that plans to establish an irrigation scheme are underway, citing climate change as a main reason for this.

He said with change in weather pattern, they need to grow various crops through irrigation.

"We need to go green and help in food security, and we hope people on palliative care will be able to have nutritious foods from us since we will have it all year round," he boosted.

Meanwhile, minister of industry and trade, Mark Katsonga Phiri warned cooperatives against abuse of resources saying such cooperatives shall face the long arm of the law.

He however appealed to cooperatives in the country to get registered if they want to receive grants and be able to export their products on the global market.

"As a ministry, we are encouraging cooperatives to blossom so that we are able to export crops such as beans, rice, pigeon peas and others to countries such as India and Sudan," he said.

In total, the grants will reach fourteen registered cooperatives of Neno district.