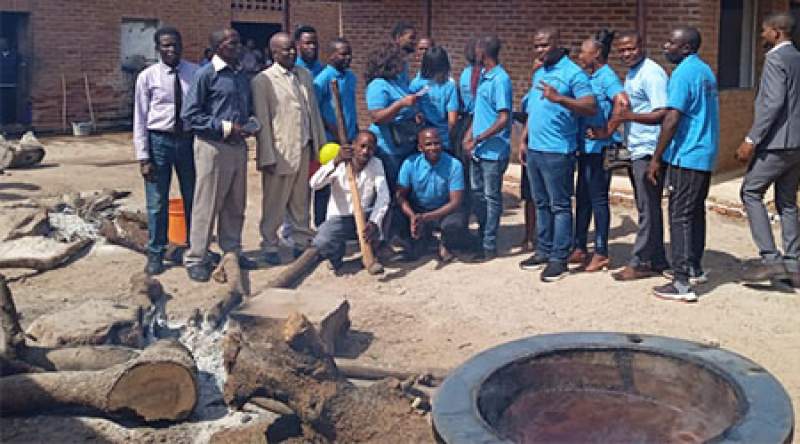 Authorities at Bangula Secondary School in Nsanje say the use of firewood in cooking for students is a big challenge that needs urgent alternative such as electricity.

The school’s head teacher, Joseph Chabwera, says the electric pots which they had will never be used again because they have been completely not functioning for almost ten years now.

“It’s easy to prepare meals using electricity unlike using firewood. You know this time around access to firewood is a hassle. Many are times when forestry officials have been on our neck even on our suppliers’ neck because of the restrictions that are there against wanton cutting down of trees,” explained Chabwera.

He added; “we have requested authorities to address such a concern. Cooking outside, standing outside with lot of heat from fire but also from the sun becomes unbearable to our cooks.”

Meanwhile, the school’s 2005 alumni have handed over a kitchen shelter to the school which is said to have cost K3 million.

The head teacher has described the support as critical in addressing some of challenges facing the school.

“This facility is vital in the administration of the school you know the area accesses a lot of heat and this time around because the school is bit aged we are no longer using electricity.

“Cooking takes place outside so with excessive heat in the area this shelter is of paramount importance and not only the heat but at times we also access heavy downpours all that derails the preparation of meals,” said Chabwera.

A representative of the alumni, Mike Biton, told Zodiak online that they felt duty bound to improve the welfare of the students.

“Some years ago, we visited the school to see the welfare of the students in general. We noted that most of the things were in mess but the shelter was a priority as the cooks were struggling.

“We have spent K3 million kwacha on the project and we raised the funds from our class of 2005. These were mere personal contributions,” said Biton.

The school has been in existence for 28 years and has an enrollment of 315 students.