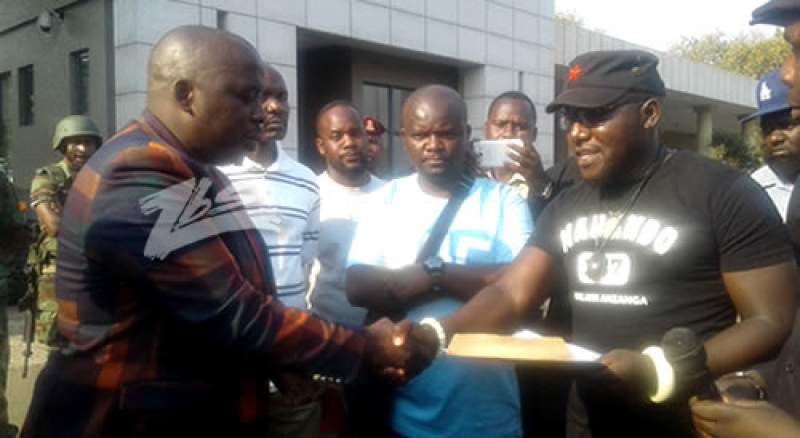 Human Rights Defenders Coalition has presented a petition to parliament in its ongoing attempt to have the Malawi Election Commission (MEC) resign or fired.

Chairperson of the Coalition, Timothy Mtambo, said they have lost hope with Capitol Hill where they previously delivered the petition in June this year, saying they hope parliamentarians will help them in their calls.

“On behalf of Malawians of good will in whose behalf you represent in this August House, we surrender this petition believing that their voice shall form substratum of your discussions on the topical issues of national interest.

“We thank you and believe that our petition will be given the attention and priority it deserves,” he said.

In Lilongwe, demonstrators marched from Community Ground to Capitol Hill then back to Parliament where they presented the petition which has some amendments from the previous one.

In the seven paged petition, the Coalition wants parliament to intervene in their calls for the resignation of MEC Chairperson, Justice Dr. Jane Ansah and the entire Commission on allegations that they mismanaged the May 21 elections.

The protesters also plead with the August House to reject Duncan Mwapasa as Inspector General of Police on allegation of incompetence.

They say Mwapasa was implicated in the police food ration scam, saying he needs to pave way for investigation.

They also reiterated their stand for parliamentarians to block allocation of funds for construction of two stadia for Nyasa Big Bullets and Be Forward Wanderers football clubs.

The Coalition has also resurrected the tabling of electoral reform bill in parliament.

Dowa East Member of Parliament, Richard Chimwendo Banda, received the petition and promised the protesters that Business Committee of the House will table it in the House.

The demonstration did not, however, run short of ugly scenes as some protesters attacked two journalists; Golden Mationga of the Nation Publications Limited and Gladys Nthenda of Kulinji.

They went away with phones and some cash, leaving Nthenda with torn clothes.