Contractor of Jenda-Edingeni Road in Mzimba May Suspend Works Over K1.2 billion Payment 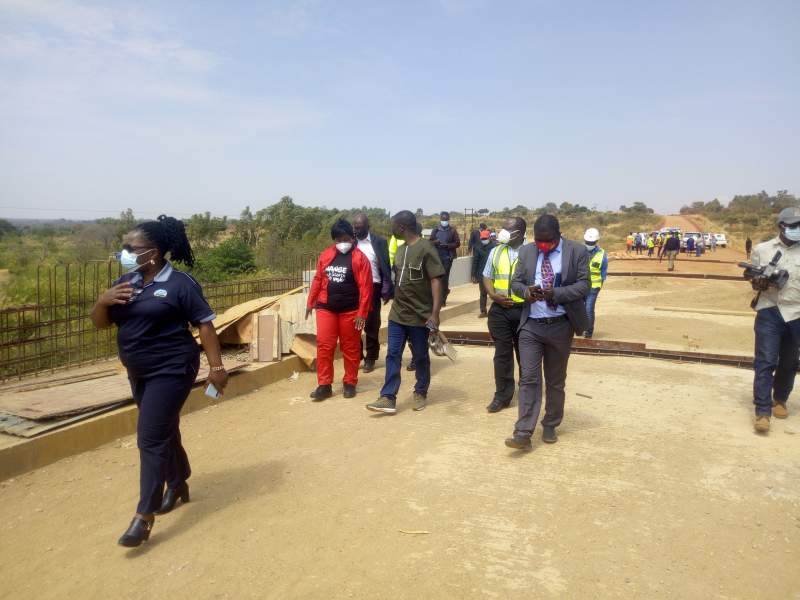 China Railway No 05 Engineering group has given government 21 days for it to pay the company an outstanding sum of K1.2 billion or they will suspend works on the 15.8 kilometer stretch of the Jenda - Edingeni road, from Chindoka to Embangweni.

This was revealed when Deputy Minister of Transport and Public Works, Nancy Chaola Mdooko appreciated work being done on the Jenda Edingeni road, the Mnjiri and Chakazi bridges in Mzimba on Wednesday.
Roads Authority Board Chairperson, Joe Ching'ani said such delays in paying contractors are derailing the completion of many projects in the country including the Jenda Edingeni Road.
Ching'ani called on other arms of government like treasury to be diligent in their work so that such contractors are paid in time
"The roads authority board is ready and geared to make sure that implementation of projects like the Jenda Edingeni road are done timely and challenges maybe there but our board is ready to deliver and mitigate where we have the ability to mitigate
One of the issues that have been highlighted here are the delays in payments and delays affect the completion of the projects that's why we want other arms of government should also play their role diligently so that projects are completed in time", said Ching'ani.
He said assurances from government that resources are available but payment is being delayed by the new IFMIS payment system are not enough where laborers working on various projects do not even understand such terms.
Deputy minister of transport and public works Nance Chaola Mdooko who also attributed the delays in paying contractors to the new IFMIS system said government will soon pay the contractor.
"It's very true that the project stalled for some time but let me assure the people of Jenda and Embangweni that government will pay the contractor and the project will be finished on time", said Mdooko.
The deputy minister also appreciated the now completed Mnjiri bridge and works on a concrete Deck at Chakazi bridge.
Mdooko said she is impressed with the progress on the Chakazi bridge and believes the project may be completed before the scheduled time of 6 months.
"We are to blame for delays in awarding the contract but the contractor has now assured us that the work will be finished before the stipulated 6 months", said Mdooko
Phase III which involves the construction of a concrete deck at Chakazi bridge is being done by Dika construction company who were awarded a K650 million contract.
Published in: News In Northern Region
Read 1574 times
Tweet
Rate this item
(0 votes)