Flood Survivors Shot in the Arm 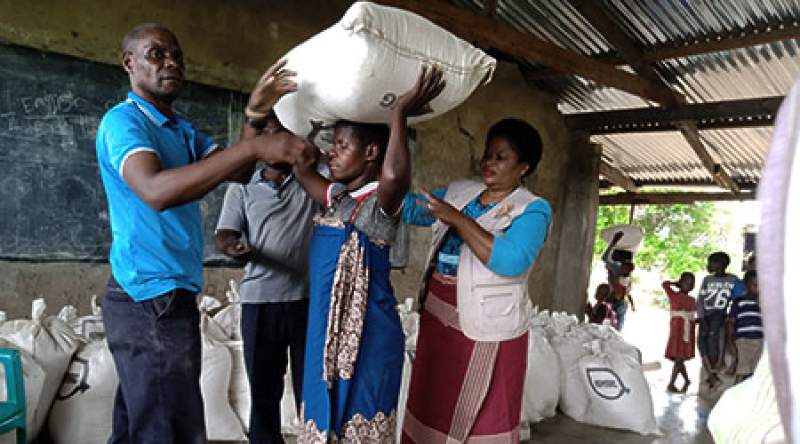 One of the beneficiaries, Marita Chikanga thanked the disaster office for the support but pleaded for more assistance - pic by Eamon Piringu

Machinga District Council has on Tuesday donated 53 bags of maize flour to families, from three villages under Traditional Authority Sitola which were affected by floods on Sunday at Chinguni Primary School evacuation camp.

The number of the affected households has risen from 48 to 53 following another collapse of some other houses.

Speaking on the sidelines of the donation ceremony, Machinga District Commissioner, Rosemary Nawasha revealed that they expect to receive more support from the Department of Disaster Management Affairs (DoDMA) by the end of the week to cater for the affected families.

"DoDMA has prepared some other relief items which will be distributed to these families. We expect to receive such assistance within the week," Nawasha said.

Nawasha further noted that they will not relocate the people but they will provide material to be used in the reconstruction process of their houses.

"No, we can't relocate these people, what needs to be done is to wait for the area today up then we will provide plastic papers for them to reconstruct the houses," she said.

One of the beneficiaries, Marita Chikanga thanked the disaster office for the support but pleaded for more assistance, as they have lost clothes and kitchen material.

"Yes, I'm happy with the support, but we are lacking a lot, for example our clothes are gone. May well-wishers do likewise please," pleaded Chikanga.

The families were displaced from their homes following heavy rains which caused flood.