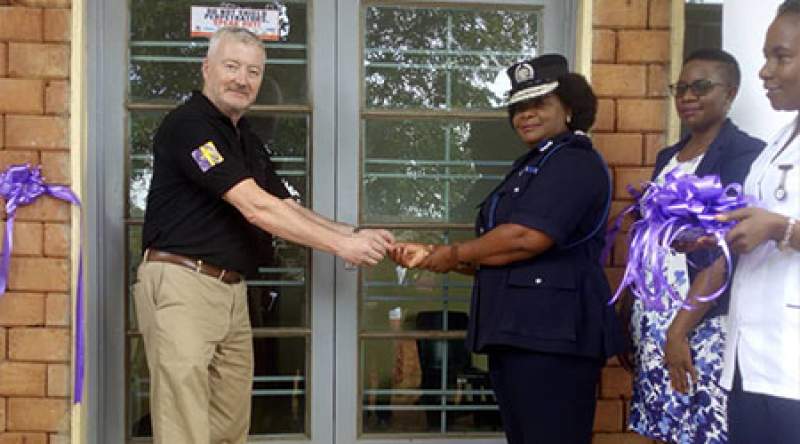 The facility has been constructed by Eastern Produce Malawi (EPM) Limited, a tea, macadamia and forestry growing company in Thyolo and Mulanje.

Commissioner Chingadza speaking to Zodiak Online said Mulanje is one of the districts in the region registering more cases of Gender Based Violence (GBV) and the district police station registers at least 35 GBV cases every month.

“We offer counselling to both survivors and perpetrators of GBV. However, all cases with criminal elements are investigated and taken to court,” said Commissioner Chingadza.

She said EPM has been supporting the Malawi Police Service in many areas and this project is a clear manifestation of the company’s commitment in promoting security in the country, the region and Mulanje as a district.

EPM's Managing Director David Reynolds said GBV retards productivity of people in a family, a community and at workplaces.

He further mentioned that it is the wish of the company to see police arresting and investigating perpetrators of GBV and later take them to court for prosecution while survivors of GBV receive psychosocial support from relevant officers.

“EPM has zero tolerance for GBV and when we report any crime at any of our estates and the community that surround us, we expect a quick response and that the law must be upheld with no excuses for inaction,” said Reynolds.

He said with the support that the company gets from the MPS, the company is committed to better the surrounding communities in different areas including security matters.

Ellen Kaira who represented the District Commissioner for Mulanje during the event said security is part of development and the council cherishes security support that EPM has been giving to the council over the years.

“What EPM has done today clearly indicates that they are a friend in everything and this is the gesture other private companies and organizations need to emulate,” said Kaira.

Senior Chief Mabuka said he will make sure that the community owns the structure as it belongs to people in the district.

The VSU was handed over complete with office furniture, computers, beds, mattresses, blankets, fridge, cooker and other kitchen utensils.

About K35 million is the amount that was spent on both the facility and the furniture.