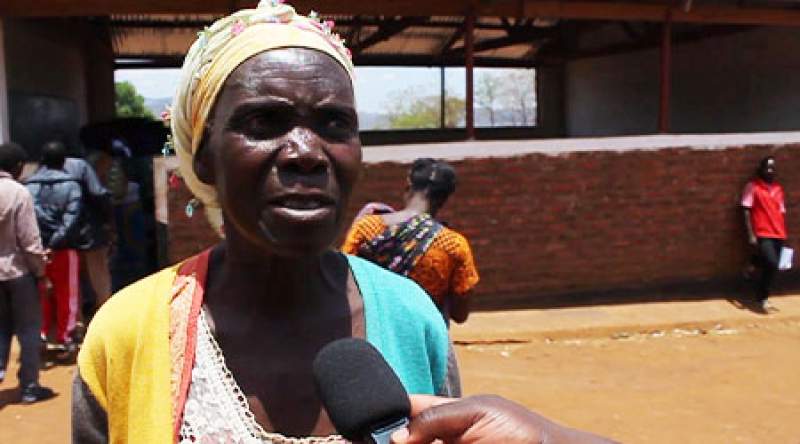 71-year-old Stelia Saka from Chavu village Traditional Authority Chiwere in Dowa, for the past three years has been harvesting just enough for her five-member family.

Saka, a widow, looks after four grandchildren, two of these orphans and the others their parents married while young and could not cope with parenthood, so they just left them with her.

Saka is among 1.3 million poor Malawians selected for a social cash transfer program, and she has for the past two years at least been receiving 8000 Kwacha a month an equivalent of ($8). All the beneficiaries of this program, aside being given this financial support, they are also trained in basic business management skills and savings so that by the end of four years they become self-reliant.

Saka has been using her money to invest in agriculture business, where she has been producing food crops to sell for profits. She has a garden where she grows a number of vegetables, from such a business she has been able to earn enough to survive.

In Malawi all beneficiaries of social cash transfer program have their names captured in the national database and they cannot benefit from any social support programs, like the Affordable Farm Inputs program in which government subsidizes the sale of fertilizer.

The assumption from government has been that, people who are on social cash transfer can make savings to buy a bag of fertilizer. Following the war in Ukraine, people in  Malawi have seen a sharp increase in the cost of basic commodities, as well as agriculture inputs even leaving beneficiaries of government’s social cash transfer exposed to the shocks caused by these crises.

Complains Saka; “Our worry is that the money that we are getting is not enough to make any meaningful investment, or saving. Since we are excluded on the Affordable Farm Inputs program (AIP), I cannot manage to save enough to afford a 50-kilogram bag of fertilizer at 82 000 Malawi Kwacha ($82). We are going to face hunger next year, because without fertilizer we cannot harvest enough. We appeal to the government to consider revising upwards the amount that we get”

Chief Gender and development officer in the ministry of gender and social welfare, Fred Simwaka says that government is aware of the concerns by the beneficiaries and is looking into them.

Simwaka says that all processes have been completed and that next year the beneficiaries would be getting 15 000 Kwacha ($15) a month.

“Government has already completed all processes for that. What we are also doing is that, we are identifying new beneficiaries. We will graduate about 80% of the current ones for being on the program for about four years now. So, by January the new beneficiaries will be receiving an improved amount,” he says.

The war in Ukraine is just an example of a global crises which are living a sting on countries in the global south. Malawi is also one of the country's which saw its economy badly weakened by Covid-19. A rough estimation by government show that over 600 000 Malawians lost jobs.

Then, while Malawi was still recovering from the shocks of Covid-19, it was also hit by two of the worst cyclones (Ana and Gombe).  Official figures from the government indicated that over 900 000 people in 17 out of 28 districts were affected, and about 80 people lost their lives.

Malawi’s finance minister Sosten Gwengwe says that 2022 has been a year to forget; “For us it has been multiple shocks, most of them global but also domestic. You remember we had cyclone Idai, before we recovered from Idai we were hammered again by cyclones Ana and Gombe. So, it has been a very terrible year for us.

“Disaster wise, it affected our yields, and about 3.8 million Malawians are facing hunger and needing support from government. This has led to food shortage which is making prices of food prices especially maize to skyrocket.”

Maize is Malawi’s staple crop it makes up over 45% of the Consumer Price Index (CPI), an index that is used to calculate inflation rates. This month, a 50-kilogram bag of maize is trading at an average price of 30 000 Malawi Kwacha about $30, a bit higher compared to 18 000 Kwacha about $18 same time last year.

The 2022 United Nations Research Institute for Social Development (UNRISD) Flagship Report: Crises of Inequality: Shifting Power for a New Eco-Social Contract among others posts that there is a link between widening of inequality gaps, and multiple crises which country’s like Malawi are facing.

The report calls for renewed commitments in the social contract as we have known it.

Is there a way out?

Minister Gwengwe says the war in Ukraine has made the crises even worse; “Beyond cyclones we have also been affected mostly by the global events, the Russia-Ukraine war has affected most economies including ours. The first being the low production of oil because Russia is a big producer of oil.

“And with the war in Ukraine, it has led to spike in fuel prices. Once fuel goes up it also gives us, the effect of inflation and prices of food and non-food items skyrocketed.”

Gwengwe recognizes that the recovery process may take long. He says that government is putting in place measures to ensure that it cushions Malawians from the consequences of the global and natural crises which have overwhelmed the country’s economy.

He also acknowledges that the recovery process may not be smooth. For instance, in May this year government announced a 25% devaluation of the Malawi’s local currency the Kwacha to mitigate the impact caused by rise in basic commodities.

However, the devaluation has had little if any at all impact because of the country does not produce enough for export.