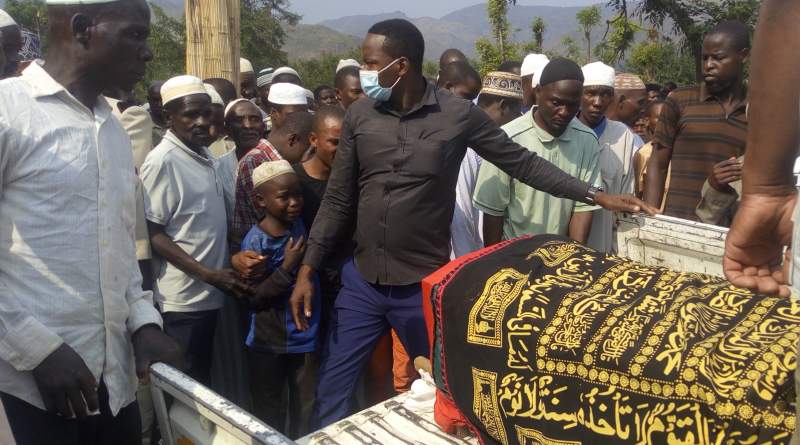 Remains of the late Gannet - pic by Christopher Sande

Disbelief and anger marred the burial ceremony of ward councilor for Makhuwira South Mannick Gannet in Chikwawa after he was accidentally shot by a police officer on Monday during a fracas at Mitondo when authorities were disbursing compensation money to families affected by the east bank road construction project.

Hundreds of people who attended the funeral ceremony on Tuesday described Gannet as a pillar who was there to serve the district with dedication and hard work.

District Commissioner Ali Phiri said the district has lost a leader of integrity.

"Councilor Gannet was a quite leader who had skills of handling disputes amicably," said DC Phiri.

On his part, late Gannet' relation Pilirani Nasiyaya told Zodiak that they are still waiting for an explanation from government on what happened and possible support to the bereaved family

"We have not been told on what led to our relative to be shot while in line of duty. We are waiting for answers from government," said Nasiyaya.

Member of Parliament for Chikwawa South Illias Karim told the gathering that late councilor Gannet was a symbol of unity.

Meanwhile, Democratic Progressive Party, DPP official  in the district Kondwani Chiutsi explained that they were shocked by the untimely death of late councilor Gannet.

The departed councilor was serving his second term in Makhuwira South ward under the Democratic Progressive Party.

He was born on 4 July 1976 and is survived by a wife, nine children and one grandchild.