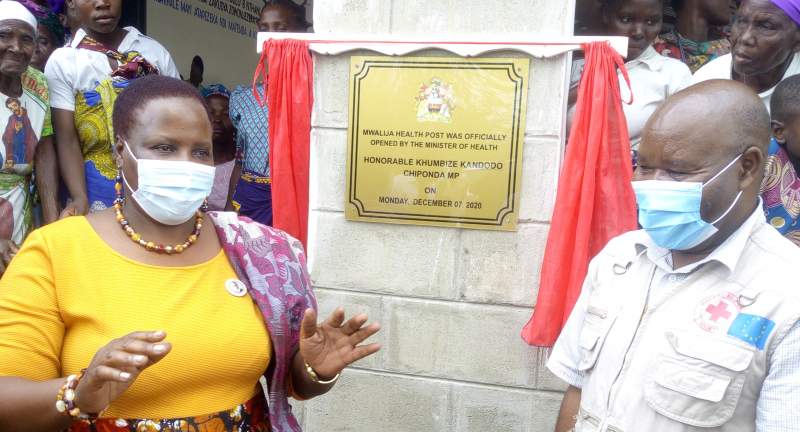 Kandodo Chiponda and Changole during the event - pic by Christopher Sande

Children of 355 flood survivors who relocated upland in Chikwawa will have an opportunity access quality health services thanks to Malawi Red Cross Society for constructing a modern Mwalija Health Post.

The organization' President Levison Changole told Zodiak on Monday after handing the facility to government that they have spent 737 million Kwacha to construct 371 houses, toilets, drilling boreholes in Nsanje, Chikwawa, Zomba and  Phalombe.

He said they have also constructed three health posts in Chikwawa, Mangochi and Mwanza.

"As a humanitarian organization, we are happy that we have made a positive impact on the lives of these people of which most of them are poor," said Changole.

"We want to commend Malawi Red Cross Society for these wonderful interventions.

"As Government, we also have a road map to make sure that more health facilities are constructed in rural areas including the new Chikwawa district hospital, recruiting 10, 000 health workers, provision of ambulances, motor bikes and bicycles to members of staff," said the minister.