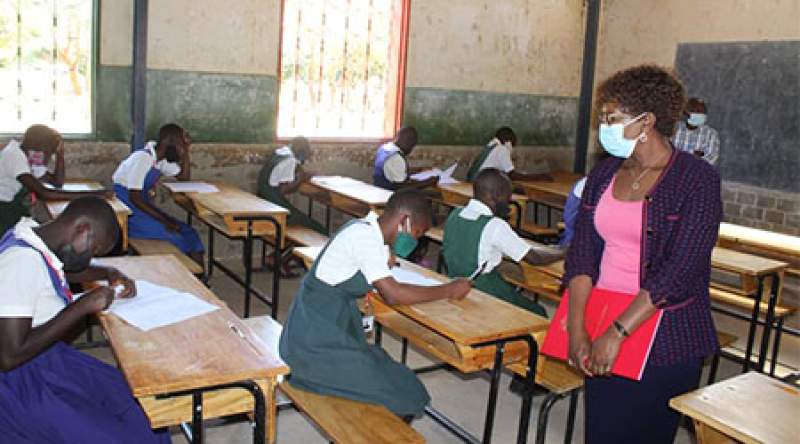 Education minister Agnes Nyalonje says she is happy in the way this year's Primary School Leaving Certificate of Education (PSLCE) examination have been administered despite a few incidences of cheating.

Speaking during a tour to some schools in Mzuzu and Mzimba on Friday during the final day of the esamination, Nyalonje commended the professionalism shown by all people involved in the exercise.

She said; "This has been a very well managed exercise, from the preparations administration of the examination which includes how examinations are taken to the different centers.

The whole exercise has been managed extremely well and this underlines the importance of having professionals in key positions who come to work with integrity."

She further added that the level of professionalism that has been demonstrated in the handling of these examinations could make MANEB regain people's trust.

But in our weekly special report we are documenting that over 140 learners from the lower shire have failed to sit for the examination, the figure also includes those that will also not sit for JCE and MSCE because of failure to pay for their examination IDs.

Nyalonje admitted the slight drop in the number of candidates, attributing this to a number of factors such as Covid-19, and Cyclone Ana and Gombe.

"The drop might well be part of the result of covid19 and cyclone Anna. Covid-19 led to the five months that we closed schools, initially in march 2020 and opened in September 2020 and then we had to close again for about a month.

“Those closures led to thousands of learners not to coming back to school. Out of the thousands, some got married,” said Nyalonje.

In Mzuzu, the minister visited ST Peter's and Katoto primary schools and in Mzimba she visited Nthungwa and Chikangawa.

About 266 000 learners have sat for this year’s Standard 8 examination.

On Thursday Police said that they arrested three teachers and five leaners for being suspected of cheating.