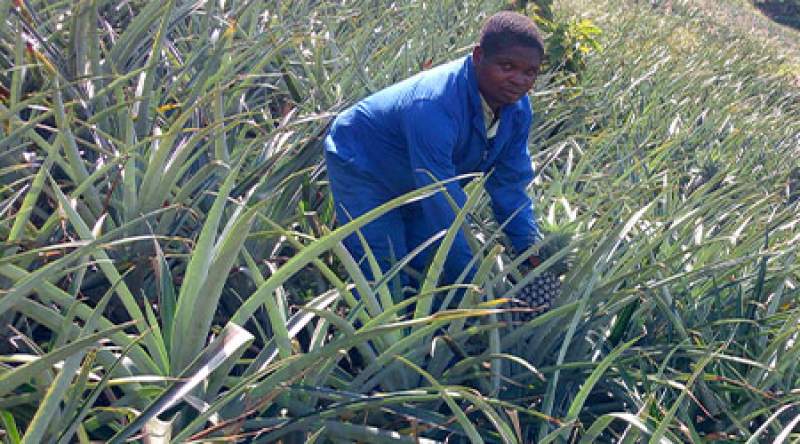 Jaire in his field - pic by Hastings Jimani

Pineapple farmers in Mulanje continue struggling to secure better markets for their pineapples forcing them to sell their fruits to unscrupulous vendors.

For example, Davis Jaire, from Nande village says that he has 11 pineapple farms but despite investing heavily in production of pineapples, he gets meagre profit from this farming.

“During pineapple pick period between December and March, prices go as low as K100 per pineapple and we just sell to get rid of them as we fear they might rot while in garden, but honestly we make losses year in year out,” said Jaire.

His worry was shared by Group Village Headman Nnesa, a pineapple farmer himself.

“We have been knocking different doors at the district commissioner’s offices trying to seek help on securing better markets for our pineapple but to no avail and we just hope that you as a reporter will help on this challenge,” said GVH Nnesa

Spokesperson for the Ministry of trade Mayeso Msokera said the farmers can better be assisted if they organize themselves in cooperatives.

“It is the wish of Government through the ministries of trade and agriculture to help farmers find better local and foreign markets for their produce and pineapple farmers are among them and our advice is, let the farmers be in organized groups for them to produce more and be able to meet the buyers’ requirements,” said Msokera.

Acting District Commissioner for Mulanje, Enock Chumachao, said among the district council’s reforms is construction of fruit juices’ processing factories which will also be helpful to pineapple farmers.

“Our financial envelope is just very little for such big projects but once we secure funds, we will embark on constructing factories that will be processing jam, juice and other foods from fruits like pineapples, mangoes, even tomatoes,” said Chumachao.

Mulanje is among the few districts in Malawi that produce pineapple in large quantities.

In 2018, Malawi exported 31 tons of pineapple juice at an average export market price of USD0.6 per kilogram.